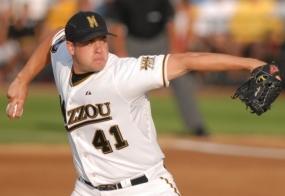 Texas Tech scored two runs in the bottom of the ninth inning to hand second-ranked Missouri a 3-2 defeat on Saturday in Lubbock, Texas. It was the Tigers first conference loss of the year and prevented junior Ian Berger from picking up his fourth win.

Berger struck out six and allowed one run on four hits in eight innings pitched. The run he allowed came in the bottom of the first inning, ending a span of 26.1 scoreless innings pitched by Berger. He has allowed just two earned runs in 38.1 innings this season and continues to lead the Big 12 with an ERA of 0.47.

The finale of the three-game series in Lubbock is set for 1 p.m. on Sunday. Sophomore Kyle Gibson (5-0) is slated to get the start for the Tigers.