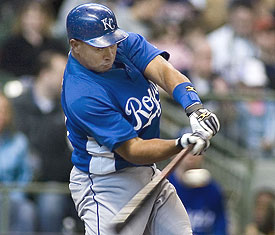 The Royals got down to their Opening Day roster of 24 from the 35 who were still on the Spring Training roster before Saturday’s final exhibition game against the Brewers.  Catcher Miguel Olivo’s suspension for the first four games of the season is causing the Royals to begin the season one player short. They’ll go to 25 active players on April 5.

This stems back to a fight last year Olivo was involved in, when as a member of the Florida Marlins, when playing a game against the Mets.

All, except for Hudson, were assigned to Triple-A Omaha.  With Olivo out, rookie catcher Matt Tupman was kept as a backup for John Buck.

Shealy had a good spring.  He hit four home runs and had 10 RBIs with a .286 batting average and a .612 slugging percentage. But  first baseman Ross Gload, who has a two-year contract, was out of options, and Shealy had an option left.

Also, if Olivo had not been suspended, Shealy might have made the roster as the 25th man.

Previous Post: « Reyes on, Ryan off
Next Post: Blues late rally not enough in loss to Hawks »