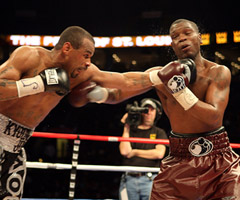 St. Louis native Cory Spinks might have gone the distance against Verno Phillips in Spinks’s home town last night, but, unfortunately for Spinks, Phillips was also still standing at the end, and the judges decided Phillips was left standing just a little taller.  Phillips won the split decision by a mere net total of four points between the three judges.  Judges Jerry Griffin and Robert Paolino scored the fight 115-113 and 116-112, respectively, for Phillips; while judge Robert Hoyle scored it 115-113 for Spinks.  Spinks claimed he wasn’t upset with the decision after the fight, only himself.

Spinks, the son of Leon Spinks and nephew of Michael Spinks, both former heavyweight champions, has now lost his second fight in a row, and three of his last five.  Two of those three losses occurred in his of home town of St. Louis.  It might be important to remember, however, that these two recent losses were also Spinks’ first two fights as a middleweight contender.

As the split decision shows, every punch counted.  The fight took a few rounds to pick up, but by the sixth round, each fighter was landing blows consistently; Phillips’s blows just seemed to be more devastating.

Spinks abandoned his normal dance numbers before the fight, instead assuming a more serious demeanor, smiling only occasionally.  His new trainer, Buddy Shaw, who replaced Kevin Cunningham, was joined by Spinks’s father and uncle in the corner.

Shaw said that if Spinks intends to keep him around, he wants Spinks to fight more.  This fight was just his fifth fight in the past three years, and while this fight seems to give Spinks less of a chance for another big fight anytime soon, there should be many opportunities for fights in his class.  [Photo by Bill Greenblatt, UPI]