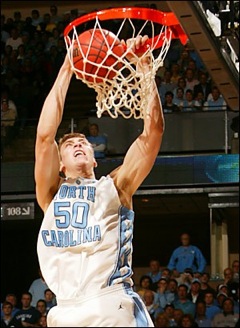 While Missouri schools like Mizzou are now out of basketball competition, Missourians still have a vested interest in the NCAA Tournament.  Mizzou rival Kansas, a number one seed, has fought its way to the Sweet Sixteen and plays tonight against Villanova.  History is in Kansas’s favor.  Villanova is a number 12 seed, and a 12-seed has never defeated a number one seed in the history of the tournament.  The Wildcats are one of the surprise teams in the tournament.  They finished with a .500 Big East record, finishing in the middle of the pack in conference standings; however, they won when it counted, in the Big East tournament championship.  They defeated 5-seeded Clemson in the first round of the NCAA tourney and 13-seeded Siena in the second.  Kansas will be their toughest test yet.

Many wish Tyler Hansbrough had stayed at home to go to college, but, understandably, he chose UNC three years ago, the perennial NCAA contender.  The junior grew up in Poplar Bluff, Missouri, and played high school ball at Poplar Bluff High.  Last night, Hansbrough and UNC defeated Washington State handily, 68-47.  UNC took the lead in the first half and never gave it up.  Hansbrough struggled in the first half, scoring only two points, but came on strong, scoring 16 of his 18 points in the second half.  UNC moves on to the Elite Eight to face third-seeded Louisville, who also won last night, defeating Tennessee 79-60.