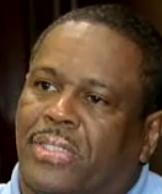 Former Vashon high school basketball coach Floyd Irons was sentenced to one year in federal prison for wire and mail fraud in a $1.6 million real estate scheme he was apart of two years ago.

The 60 year old Irons, one of the most successful high school basketball coaches in the state’s history was also ordered to help pay restitution of $653,000 as he and two others were sentenced in federal court for what prosecutors termed a failed and fraudulent "get rich quick" scheme.

Irons also came under some heat during his time at Vashon, where he had over 800 victories and 10 state titles.  There was a school investigation into the use of school funds.  He was later forced from his job as basketball coach.

David Hunn of the St. Louis Post-Dispatch shares more on the story.

Previous Post: « Tax returns even faster this year
Next Post: Nixon’s attempts to restrain "spring rise" are denied, for now »