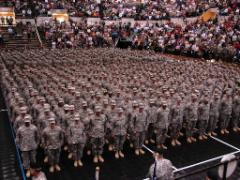 Family and loved ones crowded the Hearnes Center in Columbia this weekend to say goodbye to one thousand Missouri National Guard soldiers from across the state heading to join a NATO peacekeeping operation in the now seceded Kosovo.  The group, the largest single deployment of Missouri Guard men and women since World War One, is known as Kosovo Force Ten.

Originally thought to be the least dangerous deployment by far, the Missouri National Guard’s year-long deployment in Kosovo no longer looks like a walk in the park.  Backed by Russia, the Serbs have violently rejected the secession, initially rioting in the streets of Belgrade a month ago when they attempted to burn down the US embassy.

The guardsman had originally expressed relief that they were going to a far less dangerous situation in Kosovo, but the recent violence has put a new sense of urgency on their training.  Kosovo saw its worst violence since the secession last Monday.  U.N. and NATO forces were involved in fire-fights with the Serbs, who were armed with grenades, guns, and molotav cocktails.  The clashes, which left at least 63 U.N. and NATO forces wounded, as well as 70 protestors, were ignited by an attempt by the U.N. to remove Serb protestors from a courthouse the protestors had occupied for three days in the divided northern town of Kosovska Mitrovica.  Following the skirmishes North Kosovo was placed under NATO military law in an attempt to put a stopper on the growing influence of some unofficial Serb security structures in north Mitrovica.

The troops are now on their way to Camp Atterbury, Indiana, for mobilization training.  The National Guard says the training will put the guardsmen in an environment closer to the reality in Kosovo.  After Camp Atterbury, the guardsmen will train further in Hohenfels, Germany, before beginning their actual deployment in Kosovo.  They are expected to return in late March 2009.