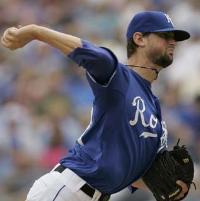 The Royals optioned Luke Hochevar, the team’s number one pick in 2006 to AAA Omaha.  The Royals continue to play well this spring holding on for a 6-5 win over the White Sox.

That leaves John Bale, Brett Tomko, Kyle Davies and Jorge DeLaRosa to battle for the final two spots in the starting rotation.  Gil Meche will be the opening day starter followed by 12 game winner Brian Bannister.

Zack Greinke who has the number three spot nailed down looked solid in yesterday’s 6-5 win over the White Sox.  Greinke pitched six innings allowing two runs on six hits including a homer, but only walked one while striking out six.