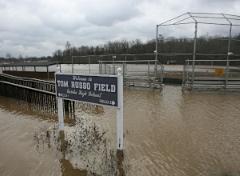 Most major highways in Missouri are open again as the floodwaters continue to recede. The Missouri Department of Transportation reports a number of roads remain impassable, mostly the smaller, rural roads. Flooding heavily damaged some roads.

The US Army Corps of Engineers reports its levees held, including the one protecting Valley Park, which was nearly overtopped. The Corps says the levees are in good shape. Assessment of the flood damage begins this week.  [ Photo by Bill Greenblatt, UPI]