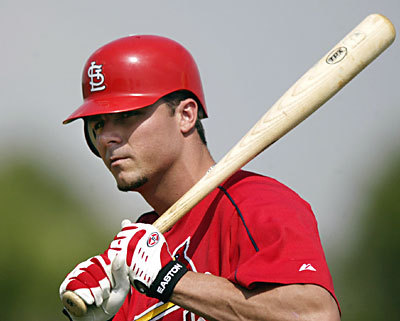 The Cardinals rocked Mets’ pitcher Orlando Hernandez with his new "lower" leg kick by scoring five runs off on him in three innings of work, including a two run homer by Rick Ankiel.

The offense has really hits a groove the last week and a half of so as five Cardinals recorded two RBI.  Albert Pujols knocked in two and added a couple of hits to drive his spring average up to .415.  Outfielders Colby Rasmus, who is headed to Memphis, along with Brian Barton, Rick Ankiel, and Chris Duncan all drove in a pair of runs as well.

Ankiel’s spring average is up to .361.  How can Skip Schumaker not be considered for an outfield spot and be batting lead off when the Cardinals open against Colorado.  He’s hitting .351 and again had two more hits and scored twice.

I’d like to see Schumaker in center followed by Duncan in left, Pujols third, Ankiel clean up and playing right field with his rocket arm and Glaus fifth.