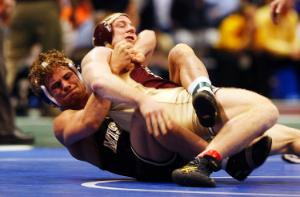 Junior Raymond Jordan, and sophomores Nicholas Marable and Max Askren earned All-American honors at the NCAA Division I Wrestling Championships held in St. Louis. This is the fourth time in five years that the Tigers crowned three All-Americans.  Jordan and Askren will go for third place and Askren will wrestle for 7 th on Saturday.

Jordan lost in the semifinals to Mike Puccilo of Ohio State 2-1.  Marable lost a rematch to Mark Perry of Iowa from earlier this year 4-2, and Askren after winning his first match of the night lost 9-2 to Nebraska’s Craig Bester.