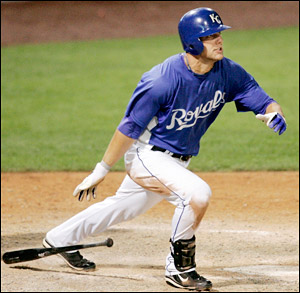 David DeJesus and Alex Gordon each had two of the Royals 15 total hits as Kansas City beat up the Brewers 11-3 under the lights in Arizona, Cactus League play.  It was another impressive outing for 39 years Hideo Nomo.

DeJesus and Gordon are both hitting over .350 this spring which is a good sign for the Royals top half of their order.  While both of those players have spots secured in the starting lineup, it was Brett Tomko who took the mound hoping to impress Royals manger Trey Hillman enough to get a spot in the rotation.  He threw three innings and gave up two earned runs.

One pitcher who doesn’t have a shot of starting is Hideo Nomo, looking to make a comeback.  In his first appearance after learning he’d have to make the team as a reliever, he threw two innings and struck out three.  He struggled when he started this spring, but early on, he was coming on in relief of Gil Meche after his spring starts and has been very impressive.