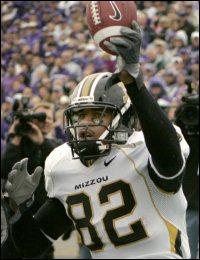 The Missouri Tiger football team scrimmaged yesterday.  The first string offense and first string defense didn’t square off against each other, but both dominated their side of the ball.  Chase Daniel played well, hitting on 5 of 6 for 119 yards and two touchdowns, one of those going to tight end Chase Coffman who is coming back from off season ankle surgery and showed no ill effects.

The first string defense gave fits to back up quarterbacks Chase Patton and Dominic Grooms.  They threw a combined three interceptions.

After skipping the NFL combine and the first Mizzou pro day earlier this month, Martin Rucker worked out for NFL scouts.  He had missed the combine and pro day trying to recover from a slight hamstring pull.  He ran a 4.71 40 yard dash and had a vertical leap of 37 inches and broad jump of 9’8.  He’s still considered a 4 th to 5 th round NFL draft pick.