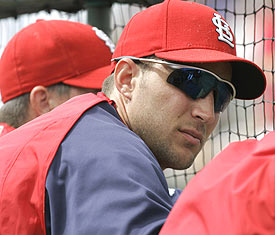 Braden Looper had given up 12 runs over his last two starts and looked a little better yesterday, which is a good sign for the number two starter in the rotation.  Looper pitched five innings and gave up one run.

Not much scoring in this game, which has been rare for the Cardinals, in fact scoring the tying run on a wild pitch that allowed Aaron Miles to come home.  Albert Pujols had an RBI single in the first.

Adam Wainwright who signed a four year deal for $15 million dollars will start Friday against the Orioles.  More details on the contract were released.  The Cardinals will also have a team option after those four years to pick Wainwright up for an additional two years at $21 million dollars which could raise his total salary to $36 million.