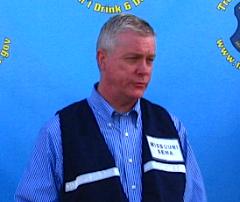 Public Safety Director Mark James says flash flooding has stranded a lot of people.  He adds there have probably been more water rescues in the last two days than there have been in years.

And the worst might be yet to come.  The Meramec River is well above flood stage, and is threatening to close down part of Interstate 44.  The river is not expected to crest until Saturday – at levels at or near 43 feet.  Missouri State Water Patrol Commissioner Colonel Rad Talburt says many of his officers are being posted in areas along the Meramec when it is flooding its banks and posing threats to people.

Lieutenant Governor Peter Kinder (R-MO) has spent a lot of time visiting the flood-ravaged areas. He describes the view from the air over Cape Girardeau and nearby communities as looking like "a vast inland sea."

Missouri State Highway Patrol Superintendent Colonel Jim Keathley warns drivers to steer clear of areas in which water has crossed roads.  He says driving through water-covered roads that appear to be safe might lead to trouble.

The Federal Emergency Management Agency (FEMA) has been working closely with state official and will provide federal assistance to save lives and protect property.  Preliminary damage assessments will be conducted once the waters have receded.

Emergency personnel can be expected to spend a busy Easter weekend on the job as the threat from the rising floodwaters will remain at least through the weekend.