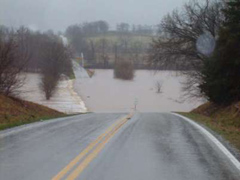 The recent heavy rains have turned into deadly flooding for several counties in Missouri.  Two people are dead because of the heavy rains, mostly across southern Missouri.  A state transportation department worker, Joshua Slatten, was hit by a semi-truck and killed while setting up barriers in flooded areas near Springfield.  A second death occurred in Ellington, in southeast Missouri.  Hardware store owner Walter Baker was swept off a small pedestrian bridge between the back of his store and his home.  He was trying to remove brush that had been lodged against the bridge.

Numerous rescues from floodwaters are reported and at least ten shelters for flood victims have been opened in seven southern Missouri Counties by the Department of Social Services and local service agencies.  The National Weather Service has flood warnings for streams as far north as Sumner, Urich, Otterville, Boonville and Carrollton.  To the south, rainfall amounts are approaching 11 inches in some places.  Winona, in Shannon County, estimates about that much.  West Plains and Cape Girardeau report nine, while Branson reports six.

Some state agency statistics provide an idea of the scope of flooding across Missouri:

The state transportation department says about 200 of its roads are blocked by water and an unknown number of local roads and streets are completely flooded.

More than 50 Conservation Department employees and boats and more than 20 state water patrol officers with their boats have been making water rescues.

The state fire Marshall has activated more than 50 swift-water rescue experts and Missouri Task Force One has 30 search and rescue experts in flooding areas.

The National Guard has set up liaison officers in emergency operations centers in Piedmont and Marble Hill with 20 Guard members and ten high-water vehicles mobilized.

Officials at Cape Girardeau are closing the city flood gates. They’re looking for the highest flood crest on the Mississippi since 2002.

The heavy rains have also threatened the "Big Muddy" to get even muddier in some areas, causing Governor Blunt to take action.  Blunt says the last thing the Missouri River needs is the Corps of Engineers’ planned Spring Rise.  He has asked the Corps to cancel the release of water from upstream reservoirs that were planned for this week.  He says the pallid sturgeon is spawning fine without the Spring Rise anyway.

The good news is that the weather service is saying the main storm system is moving out of Missouri.  (Photos by KTTS)