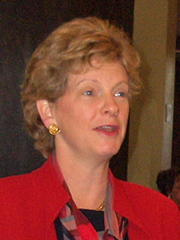 Secretary of State Robin Carnahan is running for re-election, after considering and then deciding against a run for governor.

Carnahan acknowledges she was tempted to seek a higher office; that of governor.

"Anytime you put yourself out on the line in these things you have to think hard about it," Carnahan tells the Missourinet, "So, yeah, I had to think about it, but it wasn’t difficult to decide I wanted to seek this office again."

Carnahan shed the behind-the-scenes image she had earned over the years, to place her name on the ballot and run for office four years ago. Carnahan worked on the various campaigns of her father, the late Governor Mel Carnahan. She also helped her mother Jean Carnahan in Washington, D. C. as a United States Senator.

Carnahan, a Democrat, considered running for governor, because Governor Blunt, a Republican, decided against running for re-election.

"When the governor decided he wasn’t running again, it turned everything upside down," Carnahan says, "I got a lot of people talking to me about whether I should give some thought to that and I gave it deep thought and decided I would run for re-election."

Carnahan says she hopes the voters will send her back for four more years.

A different decision would have set up an interesting primary for Democrats. Democrat Jay Nixon, the state Attorney General, had already declared he would run for governor, long before Blunt decided against a re-election campaign.