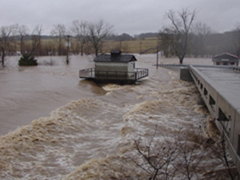 Governor Blunt has asked the federal government to quickly approve disaster declarations for 70 Missouri counties and the city of St. Louis as floodwaters continue to rise, threatening homes and businesses over a large swath of Missouri. Five deaths from floodwaters have been confirmed.

Lt. Nick Humphrey with the State Water Patrol says emergency crews are working hard to reach residents forced out of their homes by flooding. He says calls for help came in every ten to 15 minutes, making it tough for emergency crews to keep up. Humphrey says the Water Patrol lost two boats swamped during rescue operations. The State Conservation Department lost one.

It isn’t the state’s big rivers, the Missouri and Mississippi, which are flooding this time. Smaller rivers, such as the Meramec and Big, are overflowing their banks. Humphrey says though the rain has stopped and the sun has even come out in parts of Missouri, high waters continue to rise and likely won’t recede for a day or two.  (Photos by KTTS)