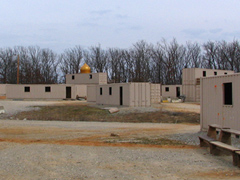 Missouri National Guard MP’s might be making some house calls after they go to Kosovo. They’re being taught the proper way to do it. There will be no ringing a door bell. No polite knocks. If a National Guard squad goes to a house in Kosovo it is likely to be looking for somebody.

A soldier seems to wave the back of the hand around the door. That’s not a wave, says Training Sergeant Roger Yarborough of Farmington. It’s a check for a booby trap trip wire. The back of the hand is used to avoid the natural tendency to grab things that are found if the test is made palm-forward. If there’s no booby trap, the squad crashes through the door, rifles at the ready, each soldier sweeping a designated part of the room.

This kind of entrance is called "dynamic entry."

They practice dynamic entry in some fake buildings then move to a fake village where Sergeant Todd Smrna of Aurora will be watching as the soldiers deal with fake bad guys and fake civilians in simulated urban warfare. "One of the big things we try to train is that civilians on the battlefield should not be killed," he says. Killing a civilian can mean a term in the Leavenworth military prison, he says.

The soldiers will be doing a lot of work in towns, whether it’s searching out insurgents or helping rebuild the many communities devastated by decades of war.

About 110 MPs are training at Fort Leonard Wood. About 900 others are being trained at Camps Clark and Crowder. A deployment ceremony will be held Saturday in Columbia although the soldiers won’t actually depart until next month.

They’ll move to Camp Atterbury, Indiana for additional training before going to the Multi-National Readiness Center in Hohenfels, Germany where their training will include being put in realistic tactical situations such as they might face in Kosovo. Only after they are satisfactorily trained there will they become part of the NATO-led Kosovo peacekeeping force.

The National Guard says they should return about a year from now.