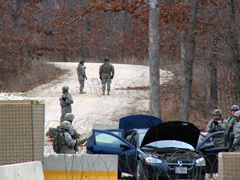 More than 100 members of a National Guard MP unit are practicing…. practicing… practicing… for the real world of Kosovo. We’ve spent part of a day with them in a couple of their training areas But even before we got to their first site, on a remote dirt road at Fort Leonard Wood when a soldier steps into the road, stops our car and orders us out… Off the road several other soldiers have us in their riflesites.

This is the first part of our trip through an Entry Control Point–a traffic control area where soldiers check for contraband and explosives. We are herded by soldiers with their rifles at the ready into a holding shack where we cannot see the car. If one of us had a trigger device to set off a bomb in the car, we would not be able to see where the car is, who is near it, or whether our driver is still with it. We won’t know when to trigger the explosion. 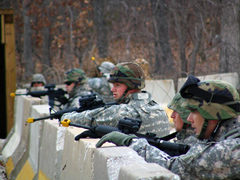 While we’re there, the checkpoint comes under a simulated mortar and small arms fire attack. Soldiers hit the ground, then scramble behind barricades, rifles pointed toward the source of the attack, eyes looking for movement, a different color in the brown woods. In a few minutes, a three-person squad heads into the woods to flush out the attacker, staying in sight of their colleagues or one another, staying in verbal contact with each other and their leader. Shortly after that, they return, a fellow Guard member playing the part of the attacker in custody.

The ranking training officer, Captain Barry Floyd of Laquey, says it’s a simulation…but nobody treats it as a game. "’We wouldn’t be there if there wasn’t a need," he says, "so we train our soldiers to fight. Whether it be in Kosovo, Iraq, Afghanistan, the training is the same."

At the end the soldiers gather around for a critique. Not bad, says a sergeant. But not as good as they need to be to do a difficult job…and stay alive. They’ll do it again the next day. and the next.      [Photos by Jon Allison]

(Bob Priddy’s extended coverage of this story can be downloaded below. Tomorrow he goes with the troops to practice urban security efforts)