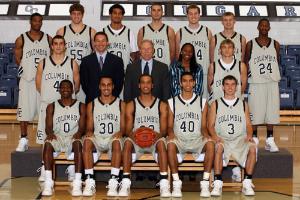 The NAIA Division I National Championships get underway in Kansas City on Wednesday.  The Cougars of Columbia College, from Columbia, Missouri will take on Azusa, California at 2:15.

However, the Cougars will be without three of it’s players after head coach Bob Burchard suspended junior forwards Christian Lewis (#30) and Michael Aquirre (#40) along with freshmen Jake Alexander (#50, top row, third from left) for violating team policy.