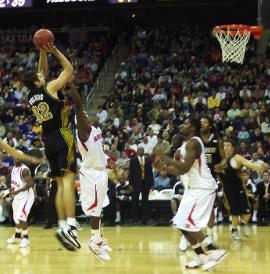 The Missouri Tigers lose their first round Big 12 tournament game to 7 th seed Nebraska 61-56.  Aleks Marich dominated the Tigers inside leading all scorers with 17 points.  An off night for junior forward Leo Lyons.  He had been averaging  21 points, the last four games, but against NU, he managed just 7 points on 2 of 12 shooting.

Missouri’s guards were hot from the outside.  Keon Lawrence who led the Tigers with 15 points was 3 of 5 from three point range.  Matt Lawrence scored 12 on 4 of 8 three pointers.  However, Nebraska did a great job of keeping Missouri out of the paint, forcing Lyons, DeMarre Carroll, and Darryl Butterfield to shoot a lot of outside shots.  The trio went a combined 6 of 25 and scored just 19 points.

Mizzou led 25-20 with 2:54 to go in the first half, but then Nebraska went on a 21-7 run into the first four minutes of the second half to build a 41-32 lead.  The Tigers would try to battle back and cut into the lead and cut the score to 57-56 with 2:10 to play.  The Huskers got called for a 5 second violation and Mizzou had a chance to take the lead, but couldn’t take advantage.  Mizzou broke down on an inbound play underneath their basket, when Husker guard Steve Harley was left alone for an easy bucket under the net to put NU up by three.  Missouri would miss a three try and they were forced to foul.  The Huskers added two free throws to ice the game.