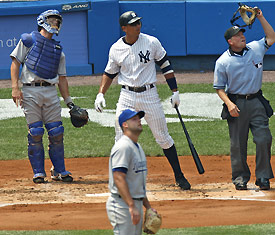 Miguel Olivo hit two doubles and a home run as the Royals beat the Angels 6-3.  The Royals gave the Angels their first loss at home this spring.  Luke Hockevar and Kyle Davies make strong cases for a spot in the starting rotation.

Starter Luke Hochevar gave up two runs on six hits over four innings, but what sticks out the most is his spring ERA which is a nice 2.25.  Could the number one draft pick find himself in the starting rotation?

Another pitcher who is trying to win a starting job is Kyle Davies.  He came over in a trade from Atlanta and pitched three innings, allowing a run and his ERA is 4.00.

Click on the link to hear what Davies thinks about where he stands in the fight for a starting job.

Miguel Olivo had a big day at the plate, and all he’s doing is working on getting ready for the season as a backup to John Buck.  Funny story about the former Florida Marlin who signed this off-season with Kansas City, he had no idea his role was going to be as a backup.  Manager Trey Hillman had to have a one on one meeting with Olivo to set him straight at the beginning of spring training.  What a blow that must have been for Olivo.  You sign with a new team, you figure you’re either going to have the starting job, since you were a starter with Florida, or at least compete, then you find out, no you’ll just be a backup. Olivo still figures to see plenty of playing time, his key asset is his strong throwing arm.