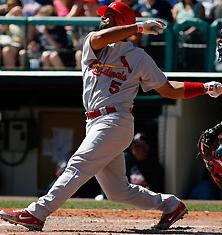 I know this is only spring training, but is anyone else becoming concerned by the amount of runs the Cardinal’s pitching staff continues to give up?  50 runs in the last five games including a 13-7 loss yesterday to Florida.

Anthony Reyes’ pitching line looked a little odd.  3 runs on 6 hits, 2 home runs, but he also struck out 6 in four innings of work.  Ryan Franklin also got banged around pretty good in an inning and a third giving up a home run and four earned runs.  Reyes getting the start in place of Joel Pineiro who had an MRI done to determine his ligaments in his shoulder are pretty swollen.  He won’t throw until a bullpen session on Friday.  With so many questions with the starting rotation, the Cardinals may look at free agent Kyle Lohse.

Third baseman Troy Glaus hit his first home run of the spring in the second inning off of Gaby Hernandez.  In the third, Albert Pujols his fourth win a man on, and then Ryan Ludwick hit a three run homer off of Hernandez as well, in a five run third inning.