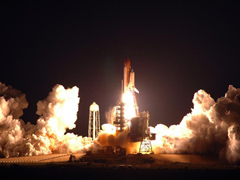 We have a Missourian in space this morning. Maryland Heights native Robert Behnken is on the Endeavor, which left Cape Kennedy early this morning for a 16-day trip to the space station and back.

Behnken is 37, on his first flight, one of seven astronauts aboard the shuttle. He’ll operate the docking system that links the shuttle to the space station and is scheduled to go on three space walks to help unload part of a new Japanese laboratory and help attach a new set of robotic hands to the space station’s robotic arm.

Behnken graduated from Pattonville High School, got his undergraduate degree from Washington University and a masters from the California Institute of Technology. He’s been with NASA for eight years.