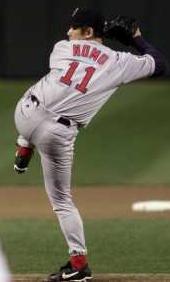 Royal’s manager Trey Hillman has been impressed with what he has seen so far from 38 year old Hideo Nomo who is attempting a major league comeback.

That comeback got off to a slow start this spring back in February when Nomo looked out of shape and was sweating profusely while running morning sprints on a cool day.  However, each and every outing has gotten a little better for Nomo.  His first two appearances came in relief of Gil Meche starts and he pitched a total of five innings with no runs.  In yesterday’s start against the Giants, Nomo gave up a two run double to Randy Winn in the first inning of yesterday’s 15-6 win, but settled down his last two innings of work.

Nomo, known for his screw-like windup when he first came up in the big leagues in 1995 with the Dodgers, has ditched that windup and has gone exclusively from the stretch this spring to relieve stress on his elbow in hopes of catching on as a reliever.

Click on the link to hear Royals manager Trey Hillman talk about what Nomo needs to do to be successful to land a spot on this team.