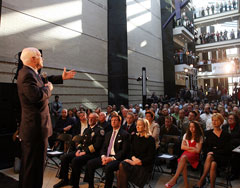 Presumptive Republican Presidential Candidate John McCain pays a visit to the St. Louis area, vowing to spend a lot of time in Missouri in the months ahead. McCain acknowledged that Missouri will be one of the important states in November, and that his time here would go beyond fundraisers.

It was a fundraiser that brought him to Frontenac Monday night for a $1,000-a-plate dinner. Today McCain holds a town hall meeting with employees of Savvis Incorporated in St. Louis County.

McCain met with reporters on Monday, talking up the military effort in Iraq and the importance of national security. He also discussed the economy, expressing his support for the economic stimulus package that recently passed Congress. [Photo by Bill Greenblatt, UPI]

Previous Post: « Mizzou’s Black and Gold game to be televised
Next Post: Trent Green signs with the Rams »