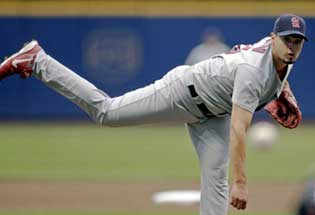 Add Joel Pineiro’s name to the list of growing concerns with the Cardinals starting pitching.  Doctor’s examined his shoulder which continues to give him problems and hope to know more by today.

Pineiro hasn’t pitched in a spring game yet.  He cut short a live batting practice at the beginning spring training with some tightness in his shoulder.  The trainers have had him doing some exercises to help loosen those muscles.  Pineiro started throwing last Friday and that went well, but needed to cut short a bullpen session on Sunday.

Pineiro is scheduled to make his first spring appearance on Wednesday.  He joins free agent signee Matt Clement who doesn’t have the arm strength yet to pitch in a game as well as Anthony Reyes who was pitching well, but had to miss his last start.  His setback was due in part to coaches saying he was just doing a little too much, too early.