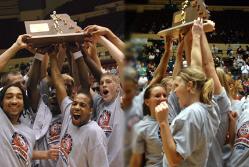 Sophomore G Mike Larson’s 60-foot heave at the horn to end the first half spurred a second-half rally for second-seeded Northwest Missouri State as the Bearcats claimed a 57-51 win over eighth-seeded Emporia State in the MIAA Men’s Basketball Championship final Sunday afternoon.

For clips from Bearcats coach Steve Tappmeyer and Mike Larson, click on the link.