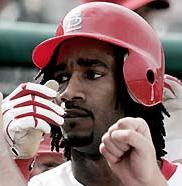 With the Cardinals 12-5 loss on Sunday to the Atlanta Braves, they finished the weekend surrendering 32 runs in two games.  One bright spot on the team has been the offensive production of Rule 5 draft pick Brian Barton.

The two day totals for Cardinal pitchers.  32 runs on 33 hits, 14 walks, 27 earned runs.  After giving up 20 runs on 20 hits and 3 errors to the Dodgers, Atlanta continued to pound Cardinal pitchers on Sunday.  Clayton Mortensen started in place of Anthony Reyes who was sent home with the flu.  Mortensen gave up three runs on three hits and two walks in two innings.  It wasn’t better for any relievers either.  Jason Isringhausen got tagged for a three run homer in his inning of work.  Ryan Franklin gave us two runs and Ron Flores, who came over from Oakland may find himself in the minors after giving up three runs in the 8 th inning to move his spring ERA up to 10.80.

The Cardinals are swinging their bats though.  Outfielder Skip Schumaker is hitting .417, Rick Ankiel .407 and Brian Barton is up to .391.  Barton is 9 of his last 15 with two doubles, a triple, and a home run.   That would make a nice Cardinals outfield come opening day.  Add to that, Pujols’ .450 average.

I had a chance to meet Barton when the Cardinals Caravan was in Jefferson City in January.  I sat next to him at the MU-KU game that night and was talking with the aerospace engineering graduate from Miami about his thoughts on coming to the Cardinals.

"It’s a new start for me.  I’m not thinking about anything else coming into the spring, other than making the big league club.  It’s a fresh start for me getting out of Cleveland,"  Barton told me.

Barton will be 26 at the end of April and has never seen anytime with a big league club, but he’s got a tall lean build and he’s pretty fast.  I really enjoyed talking with the kid who was real quiet and didn’t mind taking a back seat to the attention that Skip Schumaker and Brendan Ryan were receiving.  I was a little disappointed when I found out that he and 38 year Juan Gonzalez were the last two players to arrive in Jupiter.

I thought why would a kid who is fighting for a spot on a big league club not doing everything he can to get to camp early.  He was on time and he may have had a good reason for not being able to get to camp early, but when I read Tony LaRussa’s comment about Barton not being there, I got the vibe he wasn’t too impressed.

After the last few games, I wonder if LaRussa is impressed by what he’s seeing now.