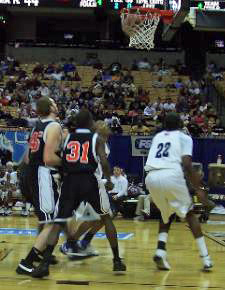 Webster Groves is the Class 5 Boys state champions after beating McCluer North 71-62 at Mizzou Arena.  Once again it was the Statesmen’s top two scorers who came through, but also solid team shooting and discipline keyed this win.

When I look at the stats, the two things I notice right away, the number of fouls.  Through three quarters, Webster Groves only commited five fouls and finished the game with six.  McCluer North’s foul situation was a little different.  A total of 23 fouls which sent Webster Groves to the line as they connected on 18 of 25 freebies.

Seniors Drew Hanlen and Zach Redel led four of the six Statesmen who played with double figure scoring.  Hanlen led the team with 19 on 5 of 7 shooting including 2 of 3 from three point range.  Redel was huge inside scoring 16 and picking up a game high 14 rebounds.