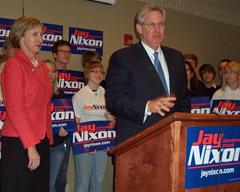 "It’s clearly one of the top issues, if not the top issue," Nixon said during the news conference. Nixon repeatedly referred to the Medicaid cuts of 2005 in his discussion with reporters gathered for the 37 th Annual Democrat Days in Hannibal.

And it doesn’t matter than Governor Blunt has dropped out of the race.

"Blunt did it. Both of the people running for the Republican nomination have embraced that as their position and I think it is a significant mistake," Nixon told reporters.

Nixon says his first priority in office would be to restore the Medicaid cuts approved by the legislature and Governor Blunt in 2005. He plans to reverse the direction. Nixon contends that health care was going in the right direction under Democratic leadership in Jefferson City until Republicans cut the Medicaid rolls. Republicans said the state could no longer afford the steep increases in Medicaid and that if left unchecked, Medicaid costs would wreck the budget. The legislation in 2005 cut 90,000 Missourians from Medicaid. Democrats claim that number has swelled to 180,000 when children and people who lost at least part of their Medicaid coverage are factored in.

Nixon said he could get the cuts restored even if the legislature remains in the hands of Republicans, because the legislature will realize the public has mandated change.