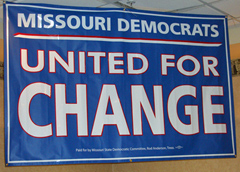 A Missouri Congressman is urging the Democratic National Convention to settle the differences in the presidential primary or risk blowing a golden opportunity.

Congressman Emanuel Cleaver of Kansas City has written Democratic Party Chairman Howard Dean, suggesting a summit of top Democrat leaders to settle on a plan to seat the Florida and Michigan delegations and end the sharp tone that has arisen between Hillary Clinton and Barack Obama.

"This is the best chance we’ve had to have both the House and the Senate and the White House in a long, long time and I don’t relish the idea of blowing it," Cleaver told reporters at Hannibal Days.

Cleaver gave the keynote address at the 37 th Annual Democrat Days in Hannibal, the unofficial kick-off of the campaign season for Missouri Democrats. Cleaver wrote Dean on Friday. In the letter, Cleaver stated that the party needs to resolve the dispute that has kept the Democratic National Convention from acknowledging the Florida and Michigan primaries and has so far led to the delegates of the two states being shut out of the national convention to be held in Denver this summer. Both states defied party rules and held their primaries early.

Also in the letter, Cleaver said he was "ill-at-ease" with the increasingly negative tone of the presidential primary campaign between Hillary Clinton and Barack Obama. Cleaver has suggested that a group of party elders could propose a solution for the Florida and Michigan problem as well as intervene to calm the rhetoric between the Clinton and Obama camps.

Cleaver, who is black, backs Clinton and continues to back her even as some high profile black leaders have switched to Obama. Cleaver states he won’t play race politics, "I think people who know me know that if I look someone in the eye and say ‘I’m with you’ I gonna be with them. It doesn’t mean I am gonna be with you unless somebody black gets in."