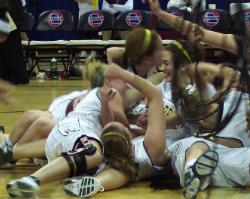 Behind junior Katherine Harry and sophomore Amaya Williams, the Rock Bridge Bruins beat Incarnate Word of St. Louis 50-35 in the Class 5 Championship in their home town of Columbia.

The Bruins opened up an 8-0 lead at the start of the game and held the Red Knights scoreless for the first 5:42 of the game.  I was impressed with the ball movement of both teams, but it was just one of those game for Incarnate Word where nothing would fall as they shot just 5 of 20 for the first half and found themselves down 27-10 at the break.

Rock Bridge’s biggest lead was by 27 late in the third quarter.

Harry kept getting the ball inside and there was nobody could guard her inside.  She led the Bruins with 21 points. Williams played with poise of a senior running the point for Rock Bridge and finished with 15 points and one turnover.

Jill Nagel’s Bruins finish their championship run 25-6.  Click on the link to hear Coach Nagel along with Harry and Williams.