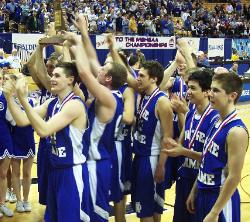 The Bolivar girls are the Class 4 State Champions after defeating Notre Dame de Sion 47-43 in overtime to cap their season at 29-2.  On the Boys side, Notre Dame (Cape Girardeau) beat St. Charles West 48-36.

Notre Dame de Sion led by 8 with just under six minutes to play, but Bolivar battled back to force overtime.  Bolivar go to the free throw line 12 times in the second half and made every free throw.  They finished the game at 91%.  Casey Garrison led Bolivar with 25 points and 13 rebounds.

St. Charles West, after hitting 6 of 12 three pointers in the first half to keep the game tied at 28, went cold from the floor making just one field on 15 attempts and missing all 11 three point tries.  Notre Dame was led by 6’8 senior Ryan Willen who can now add a basketball championship to his two soccer state championships.