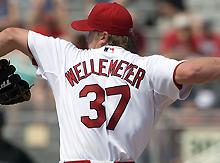 Wellemeyer only allowed two hits over 3 2/3 innings and struck out four, but he also walked four.  Jason Isringhausen made his spring debut and pitched a scoreless inning to pick up the win.  Another pitcher who I think is going to have a good year is Brad Thompson.  He was versatile last year starting and coming out of the pen.  Yesterday, he went three innings and gave up no runs on four hits with four strikeouts.

Skip Schumaker who is making a case that he can be an everyday outfielder went 3 for 4 with that solo home run, plus three runs scored.  Schumaker is hitting .444 this spring.

Previous Post: « Missouri State Wins Play In At MVC
Next Post: Royals Win But Get Butt-Chewing By Manager »