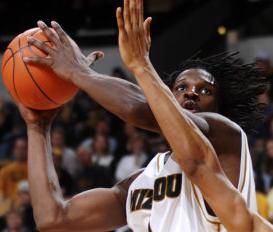 The Missouri Tigers are 4-0 on Senior Night at Mizzou Arena winning in double OT 81-75.  Marshall Brown, Vaidotas Volkus, Darryl Butterfield, and Jason Horton all started the night as Mike Anderson honored the seniors.

Iowa State jumped out to a 12 point lead three and a half minutes into the second half as the Cyclones physical play again did the Tigers in, much like the first meeting in Ames.  The Cyclones got to the line 13 times in the first half and had 8 offensive rebounds, leading to a 32-27 lead.

With the score 41-29, Missouri started to turn up the defensive pressure which caused problems for Iowa State.  Demarre Carroll’s 15 foot shot gave Mizzou a 47-46 lead with 9:35 to play. The teams traded the lead ten times from that point on with the lead never being more than three for either team.  Carroll’s free throw with just over two minutes to go gave Mizzou a 59-58 lead.

With Mizzou down by three with 29.9 to play Leo Lyons backed into Jiri Hubalek, hit the basket and drew the foul.  That three point play tied the game against 62, then a turnover off a tipped pass gave Mizzou the ball with 20.9 to play.  Mizzou ran the clock down to two seconds and Lyons jump shot in the lane was short sending the game to overtime.

In overtime, Leo Lyons dominated on the boards, picking up an offensive rebound and two on the defensive side and picked up four points as Mizzou held Iowa State scoreless 3:22 into overtime to open up a six point lead. A Bryan Peterson three pointer cut the lead to three, but Hubalek fouled out, giving Mizzou two shots.  Tiller hit one, to put the Tigers up by four.  Iowa State hit two free throws and with the lead 69-67, Mizzou milked down the game clock to 11.5.  A missed shot by Horton and a rebound out of bounds gave the Cyclones one last shot to tie.  Diante Garrett spun in the lane and missed the first shot, but he got the rebound and put it back in to force double overtime tied at 69.

In the second overtime, the teams traded baskets and were tied at 75, when Carroll put Mizzou up by two with a quick turnaround in the lane with just over two minutes to play.  He then came up with a defensive rebound and Mizzou called time with 1:27 to play.  On the ensuing possession, Mizzou was called with a shot clock violation giving ISU the ball with 1:05 to play, but got called with an offensive charge.  Again, Mizzou milked the clock down to 15 and Lyons nailed a 15 footer.  Garrett then lost the ball, Tiller lobbed out to Carroll who dunked his 26th point of the night to put an exclamation mark on an 81-75 final.  Lyons, added 19 points.