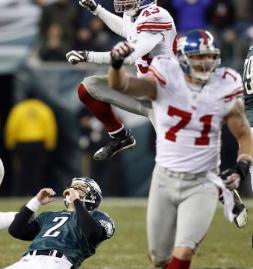 Dave Tollefson is a 6’4 255 defensive lineman who played his college ball at Northwest Missouri State.  He holds the single season record with 12 1/2 sacks at the school.  He’s battled through injuries, NFL Europe and practice squads.

Last year, through the middle of the season he was picked up by the New York Giants and only guaranteed three weeks on the practice squad with the Giants.  At the same time, his wife was finishing up school at the University of Nebraska Omaha and the young couple is waiting for the arrival of their first child, talk about stress!

Well, through hard work and determination, Dave not only lasted the required three weeks for the Giants, but got activated to the 45 man roster and found himself on a Super Bowl Champion.

Enjoy my conversation with a guy who worked his way to the top of the NFL.