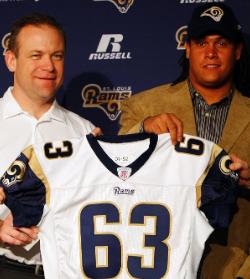 "All along we liked two guys in the interior line in free agency and we got one of them," said Rams coach Scott Linehan, alluding to Alan Faneca, who signed with the New York Jets. "Jacob wanted to be here, he wanted to make the visit.  He wanted to be with the Rams.

"Jacob just turned 27. He’s going into his prime. This is a tremendous athlete who plays well against great competition.  He showed that against the best linemen in the AFC South.  He should be a mainstay in our offensive line for several years."

Brown, a Miami (Ohio) University product, enters his fifth season in the NFL after spending the first four seasons of his career with the Tennessee Titans.

In 2006, Bell was a member of an offensive line that helped the Titans rank fifth in the NFL in rushing with 2,214 yards, good for a franchise record 4.7-yards per carry average.

A fifth-round draft choice (138 th overall) of the Titans in 2004, Bell has played in 55 career games with 46 starts, including a career-high 16 starts in 2007.  Of his 46 career starts, Brown has started 43 at left guard and three at right tackle.  Bell also started at left guard for the Titans in the team’s playoff contest at San Diego last season.