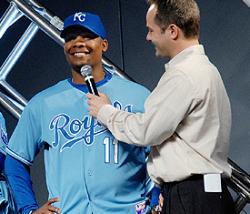 According to an article by Jon Heyman of SI.com , baseball commissioner Bud Selig may not discipline the 89 players that surfaced in the Mitchell Report, which could pave the way for Jose Guillen’s 15 day suspension to be dropped.

In the Mitchell Report, it was recommended, "The Commissioner should give the players the chance to make a fresh start, except where the conduct is so serious that he must act to protect the integrity of the game."

In Heyman’s article he says that Major League Baseball and the player’s union are trying to follow the report’s recommendations for cleaning things up and because of that, Selig may go along with not penalizing the players since the offenses happened a few years ago and it’s highly possible that more players were involved in some type of activity that wasn’t exposed by this report.

Guillen received his penalty for violating baseball’s drug policy  in 2004 and 2005. He was suspended shortly after the Royals announced Guillen had signed a three-year, $36-million contract.

Manager Trey Hillman would love to see the suspension lifted, which means Guillen would be available for the teams first 12 games.   One of Hillman’s team policies has been to keep his veterans out of early spring training games and it’s possible Guillen won’t see action until next Sunday.