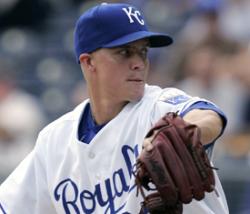 The Texas Rangers and Kansas City Royals pounded out 30 hits between the two teams as the Rangers beat KC for the second time this spring, 15-7 the final score on Saturday.

Alex Gordon lined two RBI singles in his three at-bats. Mark Teahen had two hits and a walk. Miguel Olivo reached three times on a single, hit by pitch and a walk. Ken Huckaby went 2-for-2.

Starter Zack Greinke delivered two scoreless innings despite two walks, unusual for him. When Greinke went out for the third, though, the Rangers got three straight singles and a run to end his outing. Before his relief, Matt Peterson, was finished, the Rangers had a five-run inning. Young right-handers Carlos Rosa and Julio Pimentel each had a rough outing. Yasuhiko Yabuta gave up a run on two walks and a bloop single but the other setup man, Ron Mahay, had a scoreless inning.