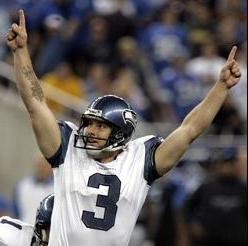 Just a day after 14 year veteran kicker Jeff Wilkens announced his retirement, the St. Louis Rams announced they signed free agent Josh Brown, one of the NFL’s most accurate kickers, to a five-year contract.

Brown, a University of Nebraska grad whose two last-second field goals for the Seattle Seahawks knocked the Rams out of the NFC West championship in 2006, spent the past five years with Seattle.  Brown has made 116 career field goals out of 145 attempts (80.0 pct.), and has scored 100 or more points in the past five seasons, a Seahawks’ record.  His 571 career points ranks fourth on Seattle’s all-time scoring list.

Brown was somebody that Chiefs had their eye on as they too struggled with their kicking game this past season.  If Brown could kick in the tough outdoor conditions of Seattle, he’ll be awesome inside the dome.