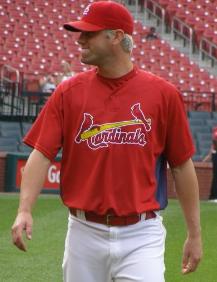 Florida’s John Baker ended it with a walk-off single to center in the ninth inning. Paul Hoover reached on an error to open the inning and was sacrificed to second. Without a hit, the Marlins scored two unearned runs to tie it in the seventh inning.

Rick Ankiel went 2-for-2 with a walk. In a two-run second inning, Brendan Ryan netted a two-out RBI single and Adam Kennedy added an run-scoring infield single. Ryan added an infield single in the sixth inning.  Ryan is making his most of each opportunity he gets now that Scott Speizio has been kicked off the team.  Ryan is vying for an infield spot this spring after a fine rookie year last year.

Cardinals left-hander Tyler Johnson was scratched from a scheduled appearance on Saturday when he experienced what the club is calling "tightness and weakness" in his throwing shoulder. He will undergo an MRI exam on Monday.