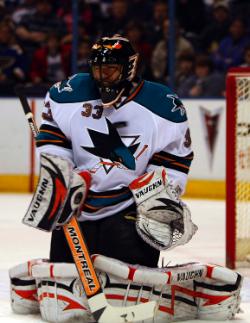 Brian Boucher made his first start of the season and it was picture perfect as Boucher, just recalled from the minors earlier in the week,  made 23 saves to beat the St. Louis Blues 2-0 on Saturday night for San Jose’s fifth straight win. (Bill Greenblatt, UPI)

Manny Legace made 32 saves for the Blues, who have scored only four goals during an 0-5-1 slump that has them on the verge of dropping out of playoff contention. The Blues entered the game tied for 12th in the Western Conference with 66 points, but has been shut out twice during the slump and eight times overall this season.