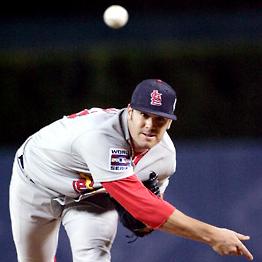 The Cardinals started their Grapefruit League schedule with a 7-0 win over the Mets.  Anthony Reyes got an early leg up on the other pitchers battling for a spot in the starting rotation.  Reyes threw three innings, allowing two hits, while striking out one.

Juan Gonzalez made his debut with the Cardinals and hit two singles and picked up an RBI.  Troy Glaus also collected a hit as he went 1 for 3.  Skip Schumaker went 3 for 4 and played in left and right field.

While Schumaker may battle for the starting centerfield job, the defensive edge went to Rick Ankiel.  Showing flashes of Jim Edmonds, Ankiel tracked down a ball hit in the gap by David Wright, dove and as he hit the ground, the ball popped up out of his glove and Ankiel snagged it in.  The catch had his teammates talking about it after the game.

ON DECK:  If this were a regular season game, Friday’s matchup with the Mets would be quite intriquing.  Projected opening day starter Adam Wainwright will toss a few innings against newly acquired Johan Santana.