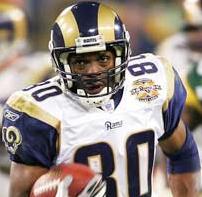 In moves to help get the Rams more than $15 million dollars under the salary cap for next season, they waived one of the team’s most popular player, 14 year veteran wide receiver Isaac Bruce.

The move was based solely from a financial viewpoint.  Bruce was scheduled to make $3 million dollars in base salary with a $2 million dollar signing bonus.  The Rams wanted to do away with the bonus and Bruce declined.

The Rams also let go of 14 year veteran Gus Frerotte who started three games in place of injured quarterback Marc Bulger last year.  Along with the restructuring of defensive end Leonard Little’s contract, it will allow the Rams that $15 million dollar surplus under the salary cap.