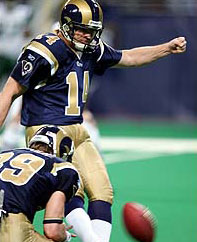 After 14 years in the NFL, 11 with the Rams, K Jeff Wilkins will retire, the team announced today.

"Throughout my 11 years with the Rams, everybody in the organization has been fantastic from top to bottom," said Wilkins, "but my retirement is the best for me, my family and the Rams.  Over the years, the Rams have become my family.  I have been truly blessed to play this game for 14 years, and I have met some great players along the way that have not only been my teammates, but who have also become great friends.  I wish the Rams the best this season and seasons to come."

Wilkins finishes his career as the most prolific kicker in Rams history.  He is the Rams all-time leader in scoring with 1,223 points, leading the Rams in scoring for nine consecutive seasons (1999-2007).  He has made 307 career field goals, 265 as a Ram which ranks first in team history.  He also is the franchise leader in field goals, field goals attempted (328) and field goal percentage (80.8 percent).  Wilkins has made 39 of 50 field goal attempts from at least 49 yards and is 38 of 49 as a Ram.  His 78.0 field goal percentage from 49 yards or more is the best among active kickers with a minimum of 20 attempts, and the best in the NFL history among kickers with at least 25 field-goal attempts from 49-plus yards.

Previous Post: « Billy Butler Trying To Find A Home In The Field
Next Post: Governor Asks For Federal Assistance for February Storms »