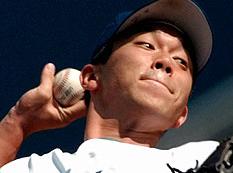 Hideo Nomo , the one time Japanese phenom pitcher with the Dodgers will be the Royals second pitcher today as he makes his spring debut this afternoon against the Padres.

The 39 year old Nomo hasn’t pitched in the majors since 2005.  Manager Trey Hillman says he’s looking for Nomo to spot his pitches well, much like he did in his last bullpen session.  Nomo has improved since the beginning of Spring Training, but still has a long way to go.

During one of the first days that pitchers and catchers reported, it was observed that Nomo was sweating profusely after completing a round of wind sprints on a particulary cool Arizona morning.  There were reports that Nomo looked a bit out of shape.

SICK BAY:  First baseman Ryan Shealy will unlikely play today.  He’s the latest Royals player to get hit with the flu.  The bug has been passed around the team quite a bit.  In fact, Luke Hochevar who threw well in the Royals Cactus League opener against the Royals threw up once he got back in the dugout after his two innings of work.

Previous Post: « Pineiro Will Be Scratched From Sunday’s Start
Next Post: Billy Butler Trying To Find A Home In The Field »