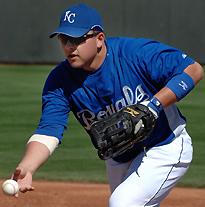 Billy Butler can hit.  Wherever he’s played, he’s hit.  That’s never been the problem.  The problem for Royals manager Trey Hillman this spring is finding out if Butler catch?  No I’m not talking about the catcher position, I’m just talking about trying to catch!

The Royals signed Butler as a third baseman, but with Alex Gordon in the organization, no sense in keeping him there.  So they moved him to the outfield and he tried that for awhile.  Now this spring, they’re teaching him to play first base.

Does anyone else find it amazing that a 21 year old player can’t play the field?We’re not talking about a guy in his late 30’s who has bad knees and would be a liability in the field, so he needs to DH.  Butler is only four/five years removed from high school.  I may be missing something here, but how can a ball player who’s just getting his major league career started have diminished skills in the field, or no skills at all?  When I was growing up, playing little league, high school, pick up games in the neighborhood, wiffle ball, you name it, I was always playing in the field. I remember countless ground balls that would be hit in practices, the infield drills, the games of pepper, throwing the ball off of walls back at myself.  In the course of Butler’s last 8 years, he hasn’t had enough practice to field grounders, catch pop ups or fly balls, or scoop throws out of the dirt?

In a story on the Royals website , Butler said "I’m happy the way 2007 went for me.  I’d like to play a position and down the road, I wouldn’t mind being a DH later in my career. But I don’t think, as young as I am, I should be a DH or should want to be a DH."

At least he’s got the right attitude toward working on his fielding skills.  Whether or not he can pull it off will be an interesting story to watch this spring. Click on the link to hear Butler discuss why it’s important he learns to play first base.