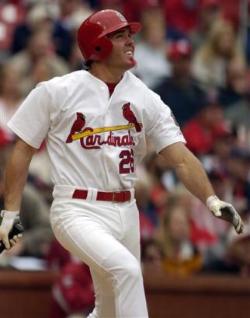 The Cardinals have said enough is enough.  Just a couple of hours after an arrest warrant had been issued for infielder Scott Spiezio in Southern California, the Cardinals cut him from the team.  The team is still on the hook for his $2.3 million dollar salary and his buyout for 2009.

Back to the main issue of the arrest warrant, which stems back to an incident on December 30th. Six charges have been filed ranging from driving under the influence, hit and run with property damage, assault with a deadly weapon other than a firearm and assault and battery.

Cardinals General Manager John Mozeliak told the Cardinals website , “I think when you look at the past year, it becomes the sum of the parts.  We were in a situation here after learning what we learned today, we felt we were at a crossroads. And we felt it was in the best interest of our organization and in Scott’s to go separate ways.”

You’ll remember Spiezio missed time last year from the team for substance abuse issues.  Both Mozeliak and manger Tony LaRussa said they were aware that Spiezio had an accident, but were not aware that alcohol was involved.