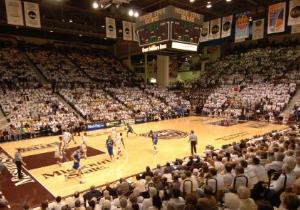 What a perfect ending to the 32-year, 494-game history of the Hammons Student Center…an 86-83 Missouri Valley Conference victory over the 20th-ranked and newly-crowned 2008 MVC champion Drake Bulldogs.

Bears’ forward Deven Mitchell, one of the most gifted student-athletes ever play in Hammons, intercepted a Bulldogs’ halfcourt inbounds pass and snuff Drake’s chance to tie the game.

Missouri State’s victory in the Bears’ final game ever in Hammons had other notable story lines. Mitchell and his four senior teammates, helped the Bears win their 19th in a row on Senior night and Drake became the highest-ranked opponent a Bears’ team has ever beaten on the Hammons floor.

Bears’ head coach Barry Hinson started his five seniors in the contest, and they combined for 55 points and 27 rebounds. The Bear fed off the frenzied energy of a season-high crowd of 7,507 which was on its feet the entire night.